Another sunny day in The Bay, another SOTA activation. This time we went out to Marin County for San Pedro Mountain (1099′ and 1 SOTA point), northeast of San Rafael. We drove out to the trailhead at the end of Knight Drive on the south central border of China Camp State Park as activators before us have done (K6JEL’s write up).

We started at noon, so the July sun was a beating down hard on us. We followed the Ridge Fire Trail, which for the first half mile is an exposed climb from an elevation of 200 feet to 600 feet that would have been much easier earlier in the day. After that, the trail is more even with a few more gradual climbs and one dip. Near the end of the trail we came to Bay Hills Drive and Henry Barbier Memorial Park (which are both unsigned). We crossed the road to another trail that starts about 100 feet to the right. This trail just took us along a ridge around the mountain, though it was shaded by tree cover and a welcome respite. We ended up taking a use-trail up to the summit and returned via Bay Hills drive on the way back, covering about 4 miles overall. We recommend just turning left at Bay Hills Dr to get to the summit.

Turn around while climbing the first half of the trail to see San Pablo Bay. 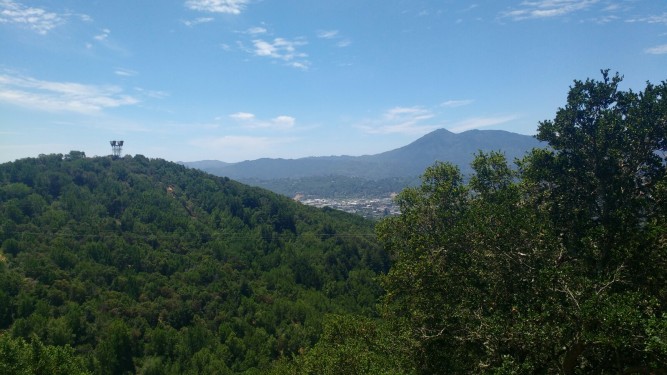 Mount Tam is visible as you get closer to the top.

We took the Ridge Fire Trail, but it seems there are many other options for tackling this summit. 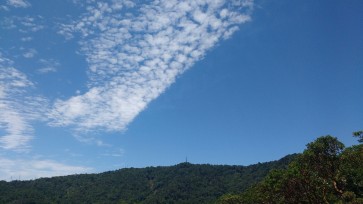 The radio tower is not on the summit. Near the right edge of this photo, the summit is just visible, though some of it is obscured by a tree.

We recommend taking this road to the summit, and not losing ground with the ridge trail that circumambulates the peak.

The summit with the concrete shack and repeater on the far end.

At the flat summit, trees block most of the nicest views, we got our sightseeing done on the way up the trail. I got a couple of quick 2m contacts with the handheld and a whip (KI6UOC and N6SPP), then moved to a low end-fed for 20m CW for the rest (W6TDX, VE7HI, K3TCU, K6HPX, N9KW, KT5X, W5YA). Thanks to all the chasers!

View all posts by ai6cu

I enjoy hiking and amateur radio. This blog is mostly a chronicle of my activations for Summits on the Air.